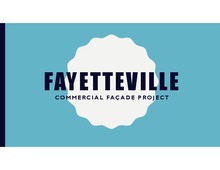 PDF
If you have been to downtown Fayetteville recently, you might have seen that some of the storefronts have refreshed looks—new paint, awnings, glass, signs, and much more. Chances are, many of the businesses you have noticed were recipients of a Commercial Façade Improvements Grant administered by the Fayetteville Main Street (FMS) organization.

With the assistance of the City of Fayetteville, FMS applied for a $100,000 grant through the Tennessee Department of Economic & Community Development (ECD) in 2015. Following award from the State, FMS accepted applications from FMS member businesses to make façade improvements. Owners were required to match the grant with 25% of their own funds, but were able to choose their own activities and use their own style. Thanks to a grant contribution from the City of Fayetteville, all applications were funded.

In total, 19 businesses and their building owners participated in the grant program. Nearly $147,000 were spent on the improvements. Most of the contractors and suppliers utilized were from Fayetteville or the surrounding area.

Carol Foster, Main Street Director noted, “Once activities were underway, we began to notice that businesses who were not participating in the grant were starting to make their own improvements.” She continued, “We [FMS] consider this as one of the greatest accomplishments of the project. The impact reached beyond the grant. Business owners are taking pride in their buildings, maintaining and improving the charm of our City. Efforts like this are essential to the vitality of our community.”

View the Before and After Pics here,